A Flash Of Blue

When I think of my time spent wandering the river bank, a bird that first springs to mind is the Kingfisher. No other bird is more synonymous with angling, and no other angler is more consistent at catching fish than one of my favourite waterside birds. When you get the wonderful opportunity to view this beautiful bird at close quarters, it is like Mother Nature went overboard with the colour palette, such bold and striking colours. Combine those colours with late evening sunlight and it is hard to describe in written words the brilliance of that electric blue central stripe cresting the length of its back from mantle to tail - nature at its most beautiful.

Over time I have become accustomed to the high pitched single note that announces the Kingfisher’s presence. Often produced in flight and lasting less than a few milliseconds, each note precedes that iridescent flash. With just enough time for the call to register, you pause and look up from the float as he powers past with conviction. Banking hard to one side like a fighter jet, he twists and turns following the contour of the land, all the while tracking the stream like a rally driver co-pilot using an ordnance survey map. After what can only be described as a moment in time, you refocus back on the stick float which is no longer present, only to bump the fish due to not striking the hook home....Arrrrrrr! I never have worked out how that happens, or coincides with turning to your rucksack for a flask or sandwiches only to miss that single bite of the day....I'm sure these fish are watching us. 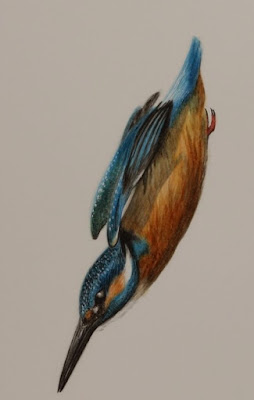 Towards the end of last year I started working in watercolour and thought the Kingfisher being so bold & beautiful would provide the perfect range of colours for which to try my hand. To be honest, I found it quite instinctive and soon got to grips with controlling a brush instead of my usual pencil - the difference in speed is staggering and much more fluid. I soon realised that mastering a pencil is far more demanding and painstakingly slow compared to working in watercolour. Nonetheless, graphite develops essential skills and is equally rewarding. I haven't worked in oil yet, but I have been building up to that moment and will start this year, so keep tuned for a change in my future works. Instead of a static pose, I wanted to express the Kingfisher’s motion in watercolours; this resulted in a 3-stage piece blending from graphite pencil into partial colour, with the final bird presented in full colour. Maybe this was a transition stage in my mind from pencil to paint, either way I was really pleased with the resulting effect, which is something I do not say very often. 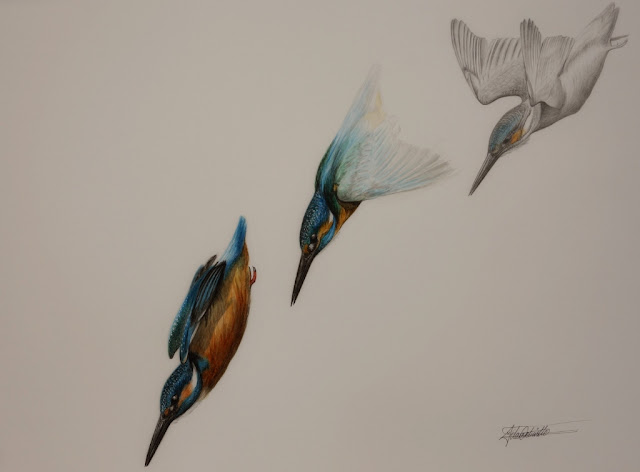 
After a couple of recent attempts in watercolour, I swung back to graphite pencil for my latest piece, a Kingfisher on an anglers rod tip...why would it be anything else! I had chosen a lovely old cane rod to maintain a traditional feel to the piece. Using strong side light, I could add a nice dark shadow to the underside of the bird to produce maximum depth. It is not an easy subject to depict in graphite because your mind subconsciously links this bird to colour, so it was important for me to try and achieve a large tonal range to provide the illusion of colour. 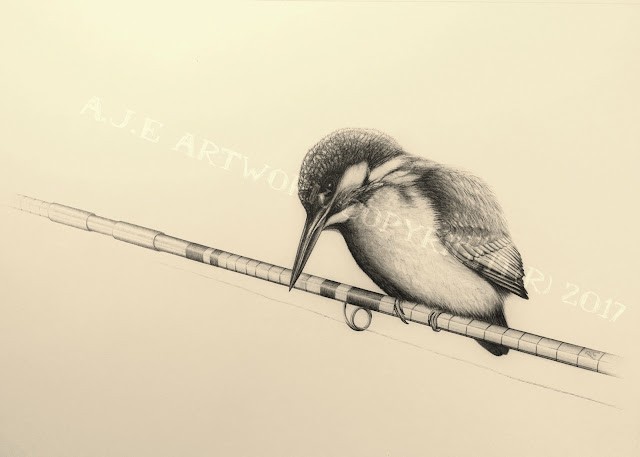